Every day thousands of Blair area residents drive by a big rock. The rock sits across the street from Two Rivers Bank, on the southwest side of Rhoades Park. It’s big, right out in the open, and you probably never read the plaque on it.

So, what is this big rock? Why is it here? What is written on it? And, did you know there is another monument on the ground a few feet away? 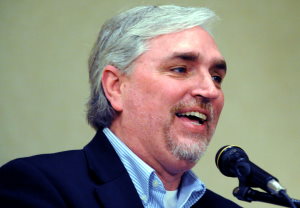 Jeff Barnes, author of the book, “Cut In Stone, Cast In Bronze: Nebraska’s Historical Markers and Monuments,“ told me today, “The boulder is ‘Sioux Quartzite.’ During the glacier period 10,000 years ago, glaciers picked up these boulders around the Sioux Falls area, and dragged them into Nebraska and Iowa. Typically these were found in farmers’ fields, and a lot of farmers – if they didn’t blow them up, or move them someplace – they got donated for local historical markers. It was a fairly cheap way to place a monument in an area.”

The inscription on the plaque reads:

This Washington County boulder marks the old territorial military trail between Omaha and Decatur established by the government in 1855. Also the site of the first schoolhouse built in 1866 in this district then known as Carter Valley – Emily Bottorff Allen was the first teacher. Erected by the Nikumi Chapter Daughters of the American Revolution – Blair, Nebraska 1932.

About the “old territorial military trail, Jeff Barnes says, “The ‘old military trail’ was important because it was the first official road project in the territory. There is a subsequent military road paid for by the federal governmentThat was an ‘east / west’ road, but this first road was a was a north/south road from Omaha to Decatur, essentially the south edge of the Omaha Indian Reservation. We think of the state today and the department of roads, and maintaining good roads to move people and products. So, the ‘old military trail’ was the first effort for the state to meet that need.”

Jim Mckee, writer for the Lincoln Journal-Star, summed this up in 2010 when he wrote, “In 1858 ‘the government established a military trail just east of Blair between Omaha and Decatur … to aid in the transportation of troops.’ Late that year, Gov. Izard predicted that the territorial road from Omaha to Fort Kearny would become ‘the great thoroughfare for western travel (and) the forerunner of the projected railroad to the Pacific’ on a route which would be surveyed that winter.”

The Blair area is important. Historically, very important. Nearly 200 years ago, Blair (originally Carter Valley) was the start of a roads project that became the lifeblood of the territory. 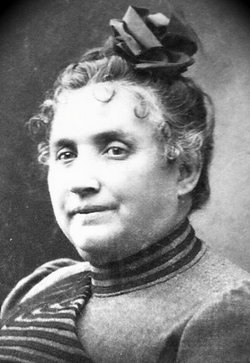 The school described on the stone was headed by “Emily Bottorff Allen.” As the words on the stone describe, she was the first teacher at a schoolhouse in this area. However, her story is one of adventure more than what a “school teacher,” would suggest.

Emily (full name Ruth Emily Bottorff Allen) wrote, “One day, while busy with my classes, the door opened and three large Indians stole in, seating themselves near the stove. I was greatly alarmed and whispered to one of my pupils to hasten to the nearest neighbor for assistance. As soon as the lad left, one Indian went to the window and asked ‘Where boy go?’ I said, ‘I don’t know.’ The three Indians chattered together a moment, and then the spokesman said, ‘I kill you sure,’ but seeing a man coming in the distance with a gun, they all hurried out and ran over the hill.”

“I think it represents, probably, one of the earliest commemorations of the permanent settlement of Nebraska. And, for the establishment of a road, the first year of the territory of the state. The location of the school – that’s significant – there were schools already starting in Nebraska, but for that part of Washington County, it was essential for (the community) to get going. And, that led to the settlement of Blair.”

Jeff Barnes on the importance of the boulder in Blair.

Like most memories, our lives are sometimes condensed into a few lines for the future to drive past without regard. The words on the stone in Blair meant more to the people who wrote them than those of us who casually pass them daily. Yet, without them, Blair wouldn’t exist, you wouldn’t have a road to drive pass a rock by on the way to your home, and I wouldn’t have a chance to write this story.

Stop by the rock. Touch it. Take a picture standing next to it. And, honor the people who gave us this great city, in the greatest state in America.

This article was written with the help of Jim McKee (writer for the Lincoln Journal-Star) and Jeff Barnes (Author, Historian, Speaker).