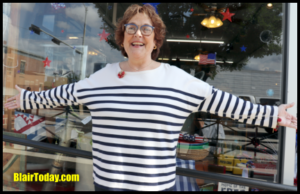 BLAIR TODAY: Jody, where did you get the idea for “Cherry Pickings”?

JODY SUVERKRUBBE: “Cherry picking” is an older saying that means, “you pick the best.” And, I just wanted to emphasize that if you come into the store, you’re going to have the best to pick from.  Plus, the idea came from… actually, my husband.  He’s the one that pushed me into doing this.

BLAIR TODAY: Why did you choose antiques and collectibles?

JODY SUVERKRUBBE: I love them, and went to auctions and malls and estate sales with my mother since I was three years old or so.  It’s always been part of our household’s furnishings.  It’s just something I grew up with.

BLAIR TODAY: Is this something that people you know thought you would do at some point?

JODY SUVERKRUBBE: I believe so.  I didn’t have any idea that that was something I reiterated with my friends.  But, when I opened the store, my friend said, “Oh, Jody, your dream is coming true because you’ve always wanted to do this.”  And I had no idea that I was so expressive that I wanted to open an antique store.  I guess I really wanted to.  So I followed my course.  It was something I wanted to do all my life.  My husband kindof pushed me into it.  And, then finally, I thought, “Why not Let’s go for it? “

BLAIR TODAY: Did you have any other prior business experience?

JODY SUVERKRUBBE: Oh, no. That’s what worries me. Not at all.

BLAIR TODAY: It sounds like this is something you do for love more than money.  Is that accurate?

JODY SUVERKRUBBE: Yes, it’s because I love antiques.  I love anything old.  I don’t know how to explain it.  It’s just something I appreciate, cherish, and guard with my life.

BLAIR TODAY: Are your customers as expressive and emotionally attached as you are?

JODY SUVERKRUBBE: You know, we moved here five years ago, and I was really wanting to meet some people.  And, it’s just hard when you’re our age and our children are grown, and we’re looking at grandchildren because everyone has their own friends.  So, I guess this is an outlet for me. It’s an outlet for Steve – he grew up in Blair.  So, when he sees friends from school or buddies that he played football with, it puts a smile on his face.  And, our customers are wonderful.  They come in and they say, “Jody, I’ve got something I want to show you.  I have an old chest out in the car.  Would you want it?  We’ll just give it to you.” And, I’ll say, “Sure.” We’ll go look at the chest. We’ll bring it in. I had a customer last week that said he won a storage container and he didn’t want it.  It was all antiques.  And, would I be interested in buying some? So I went out to the truck bed and I said, “I’ll buy it all.”  It was just really neat, neat things. So that’s what our customers are like.  They come in, they talk, they ask if we’re interested in buying things.  It’s really cool meeting new people.

JODY SUVERKRUBBE: Oh, I love it.

BLAIR TODAY: Have you been to their store in Iowa?

JODY SUVERKRUBBE:  Yes.  It’s a little different than what you would expect.  I’m sure their shop in Texas probably has more merchandise than what they have in Iowa, but that’s been a couple of years, so maybe it’s changed. But, I was a little taken aback by house, how sparse it is.

BLAIR TODAY: When you look at their show most of it is about relationships and stories shared with people.  Do you find most of your time is spent on the stories and the people who tell them, or on the business end of things?

JODY SUVERKRUBBE: I Iove talking to the people.  I love their stories.  I cherish their stories.  We don’t really haggle too much over price.  We just barter a little bit or we trade: I’ll give you this box for that coin or whatever… And, that’s not a big deal. It’s just talking to people and hearing their story.  I had a woman from Florida that had been in the store, and she just loved this corner hutch.  And, she called me from Florida, and said, “I need that corner hutch, I love it.  Would you put ‘sold’ on it? And, I will pay you for it.”  And, she did come into the shop and they bought it.  It’s just things like that that make you happy and make you think, “well, it might be working. “

BLAIR TODAY: There are six, as far as I count, used, second hand, thrift, or antique outlets here in Blair.  Do you see that as competition for Cherry Pickings, or is it irrelevant because you just love what you do?

JODY SUVERKRUBBE: I love it.  And, I embrace the idea of having Main Street being full of stores and shops.  And, my antiques are a little unique – I have a little bit of everything, I think.  I had a customer come in, ask me if I had an anvil and “I said, no. I have no idea.” Or, a customer came in asking for silver coins. If we had silver coins, and I don’t deal with coins, I know nothing about them.  So that would be another outlet that someone could look for.  It’s just enjoyable.  I like having a full city. I think it would be just awesome.

BLAIR TODAY: If you could change one thing to make business in Blair better, what would it be?

JODY SUVERKRUBBE: It would be diversity – different stores.  It would be nice to have a shoe store.  I’d love a “soda fountain” with cookies and malts.  I know we have that with Butches, but we could do something with the old round chairs – make it more “antique-y.”

BLAIR TODAY: We interviewed Mayor Hansen last week, and he said the same thing: Blair needs unique businesses that address a need that can’t be found in 20 miles around…

BLAIR TODAY: Do you do buy and sell on the internet?

JODY SUVERKRUBBE: We do buy online, and do online auctions.  Sometimes we go to auctions.  We travel – go to Texas, Tennessee, Iowa, Wisconsin…  We just travel when we hear that there’s a sale going on…

BLAIR TODAY: What is the main thing that sets Cherry Pickings apart?

JODY SUVERKRUBBE: We have very unique items.  We have stained glass, glass and brass knobs, old kitchen accessories – stove, refrigerator, and old “Coke machine,” malt machine, sundae machine… We have just a little bit of everything.  And, I think you would enjoy taking a look to see what we have. You’d be surprised.

BLAIR TODAY: It seems like every day there’s a surprise for either you or your customers… 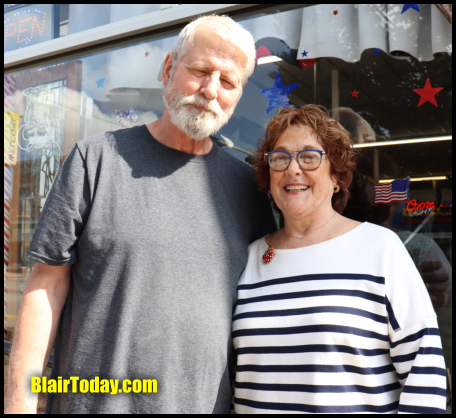 JODY SUVERKRUBBE: That’s very accurate. And, I just want to thank everyone around Blair – Fremont, Omaha, Bennington, Tekamah, Council Bluffs, Missouri Valley – you have been so supportive of our store, and of us.  I’m very grateful.

Cherry Pickings is Jody and Steve Suverkrubbe.  Jody is the “Captain,” with Steve the “Co-Captain,” this according to Jody!  You can find Cherry Pickings at 1705 Washington in Blair.  Their phone number is (402) 812-9468.