Charlie Powers is focused, passionate, and dedicated. He wrestles for Blair High School under the tutelage of coach Erich Warner. Coach Warner told us, “Charlie is a great teammate who has a tremendous work ethic and drive to become a great wrestler. He is challenging himself this summer having wrestled at the Disney Duals in Florida, and he is competing at Fargo next week where he will wrestle some of the top kids in the nation.”

Charlie’s winning percentage was 83% from 2020 to 2021 – with six first place finishes. But, he’s one of the Best of Blair, because he knows some key life lessons we should all embrace.

(1) BLAIR TODAY: I know your brother, Hunter, wrestled. Was he an influence on your decision to wrestle?

CHARLIE POWERS: Oh yeah. For sure. I definitely saw Hunter doing it, and decided, “that was kinda fun.”

CHARLIE POWERS: A little bit. But, that’s because I messed around too much. Other than that it was definitely not “fun.”

(3) BLAIR TODAY: So, early in your career, you were not as serious as now?

CHARLIE POWERS: Oh yeah. For sure.

(4) BLAIR TODAY: What turned you around to focus on wrestling?

CHARLIE POWERS: The idea of wrestling in college. And, wanting to win. I definitely developed a passion. I got beat up a lot at practice, and I got tired of it, and set a goal and went for it.

(5) BLAIR TODAY: You’ve been on the team for three years. How did the team change since you joined?

CHARLIE POWERS: The team is a little better since my freshman year. Granted we did not have a chance to do more since Covid was an issue last year. I feel like I’ve become a bigger part of the team since I have been more successful of late. Since that’s been happening people have been looking up, seeing my accomplishments, and asking questions like how and what could help them.

(6) BLAIR TODAY: What was it like wrestling during the year of covid?

CHARLIE POWERS: The wrestling took place before covid and before things got shut down. So, it didn’t really affect us. 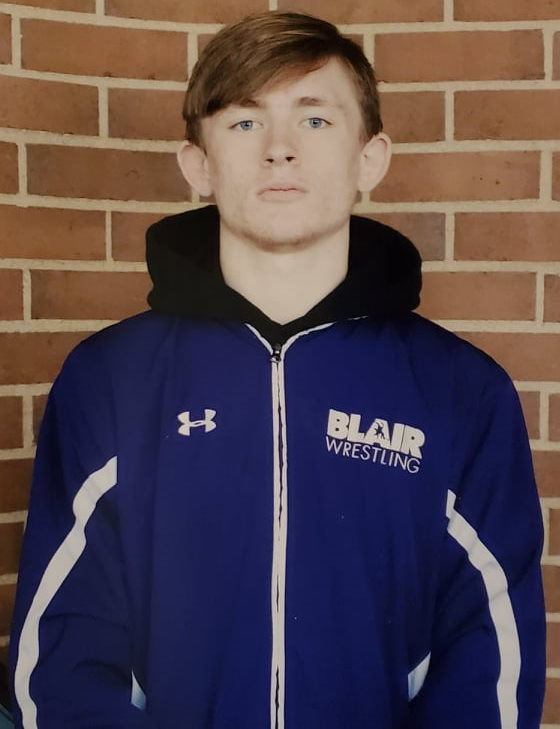 (7) BLAIR TODAY: What about the season ahead? Do you have concerns about how covid may affect your season?

CHARLIE POWERS: No. I don’t think it will have any affect, honestly. The “mask mandates” will be gone – which was really the only part that annoyed me because practicing in masks when you’re cutting weight sucks – you can’t breathe, and you’re already out of energy. It sucks, hardcore.

(8) BLAIR TODAY: Is it too early to talk about scholarships? Are there schools looking at you? What is your future at the next level?

CHARLIE POWERS: I think there is. There have been colleges looking at me. I have been contacted by a few coaches which is very exciting. After this next season is when I really feel like stuff’s going to be coming – when more college coaches will talk to me to see what’s going on.

(9) BLAIR TODAY: How does it feel to get a call from a coach?

CHARLIE POWERS: It’s cool. A little different. You definitely don’t want to say something really stupid – which for anyone who knows me, knows I do that a lot. It’s exciting, knowing that someone might want you on their team – and wants you to be a part of their program.

(10) BLAIR TODAY: Why is wrestling so important to you? What has it done for your life?

CHARLIE POWERS: It taught me how to set goals. It gave me a drive to do all the things I do, because in wrestling you can’t just say you’ll do something and then not do it. If you say you’re going to do it, you have to go through with it. I see that a lot in the “real world,” with everything I do. This last season I said, “I want to dominate every time I went on the mat.” And, I very nearly did that. There’s a few matches, give or take… But, more likely than not, I completed what I set out to do. I said I would “make weight” everytime, and I made weight everytime. Wrestling gives you a sense of accountability, which is very helpful. If you don’t have accountability, how is anyone going to trust you?

(11) BLAIR TODAY: What was the low point of the last three seasons?

CHARLIE POWERS: Definitely last year. I tore my shoulder, and had to be out for the season. It hurt physically and mentally. I almost didn’t know what to do at that point.

CHARLIE POWERS: Honestly, my drive. I said I wanted to come back and destroy everything. That thought of me coming back to be an absolute shut-out, choking because I didn’t want to hurt my shoulder again that didn’t sit well with me. So, I said I’m going to come back and win. I wanted it so bad. I missed the sport. It’s such a big part of my life, that when it got taken away, I was like, “What do I even do?”

(13) BLAIR TODAY: What was your highest moment so far?

CHARLIE POWERS: Stepping back on the mat for the first time after getting cleared. Then, getting third at state after a phenomenal season – getting as far as I did, and then going out how I did, definitely was a positive. Then, breaking three records, that was super-hype.

(14) BLAIR TODAY: What does it feel like when a crowd cheers and chants your name when you win?

CHARLIE POWERS: Oh, it’s amazing. It’s a feeling where you know someone wants you. Then, when you have an entire crowd just going crazy because you just had a really close match, and you come out on top, or pin someone. You think, “Wow, I just did that. And, these people just saw it.” It’s heartwarming… It makes you want to keep going. It’s a moment you want to live for. “I will put the work in, so I can feel that again.” It’s almost addicting.

(15) BLAIR TODAY: There are challenges and obstacles in the way of even the most-focused person today. And, as a young person those hurdles can be steep. How did you avoid them to remain focused and on track with your goals?

CHARLIE POWERS: My mom helps me with that. Also, I listen to a lot of music. And, keeping the thought in the back of my head, “If I miss this workout, who is going to benefit from me not doing it?” Those big moments… The ones I told you how I lived for them? There’s so many more coming up ahead in life I want… And, going to college to continue with that… I mean, college sounds like so much fun. The competition level is so much higher than high school. It’s fun to go out on the mat and pin someone thirty-seconds.

…it means so much more when you get those triple-overtime matches, where you put everything you have on the line, and at that moment it’s all about who has the bigger heart and wants it more. Then, when you finish that match and win it – there’s no better feeling.

(16) BLAIR TODAY: When your wrestling career is over – whether high school, college, or beyond – what do you want people to say about you?

CHARLIE POWERS: I hope they say I was a great athlete, a good sport, and worked my ass off. The work means more than the winning sometimes.

The Horses Scott Frost Rode in On